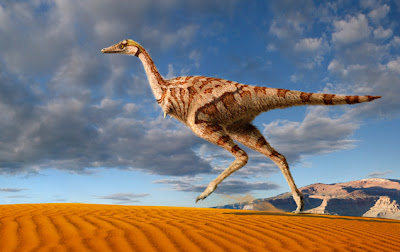 A new species of parrot-sized dinosaur, the first discovered with only one finger, has been unearthed in Inner Mongolia, China. Linhenykus monodactylus is named after the nearby city of Linhe.

The new dinosaur belongs to the Alvarezsauroidea, a branch of the carnivorous dinosaur group Theropoda. Theropods gave rise to modern birds and include such famous dinosaurs as Tyrannosaurus and Velociraptor.

The fossil comes from the Upper Cretaceous Wulansuhai Formation (84-75Ma), located near the border between Mongolia and China. The authors uncovered a partial skeleton from the site, which included bones of the vertebral column, the forelimb, a partial pelvis and nearly complete hind limbs.

The new theropod is unusual in having just one large claw, which may have been used to dig into insect nests, on each of its hands. The presence of only one finger in Linhenykus shows that these vestigial fingers were not present in all members of the group. The reasons for the loss of the two outer fingers in Linhenykus are unclear, and their disappearance may simply reflect the fact that they were no longer being actively maintained by natural selection. link
Posted by Michael J. Ryan, Ph.D. at 8:09 AM