Mammals Got Bigger After Dino Extinction 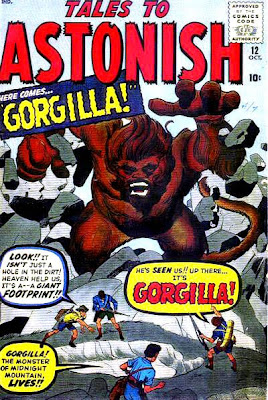 Tales to Astonish © Marvel Comics
Researchers have demonstrated that the extinction of dinosaurs 65 million years ago made way for mammals to get bigger - about a thousand times bigger than they had been. The study is the first to show this new pattern of increased body size of mammals after the exit of the dinosaurs. Mammals grew from a maximum of about 10 kg when they were sharing the earth with dinosaurs to a maximum of 17 tonnes afterwards.

"Basically, the dinosaurs disappear and all of a sudden there is nobody else eating the vegetation. That's an open food source and mammals start going for it, and it's more efficient to be an herbivore when you're big," says paper co-author Dr. Jessica Theodor.

Theodor says as well as confirming the dramatic growth in mammalian size after the dinosaurs, the study shows that the ecosystem is able to reset itself relatively quickly.

"You lose dinosaurs 65 million years ago, and within 25 million years the system is reset to a new maximum for the animals that are there in terms of body size. That's actually a pretty short time frame, geologically speaking," she says. "That's really rapid evolution."

"Nobody has ever demonstrated that this pattern is really there. People have talked about it but nobody has ever gone back and done the math," says Theodor one of the 20 researchers from around the world who worked on the study. link 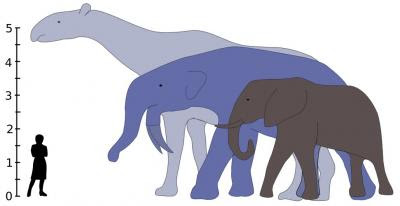 The largest land mammals that ever lived, Indricotherium and Deinotherium, would have towered over the living African elephant. The tallest on diagram, Indricotherium, an extinct rhino relative, lived during the Eocene to the Oligocene Epoch (37 to 23 million years ago) and reached a mass of 15,000 kg, while Deinotherium (an extinct proboscidean, related to modern elephants) was around from the late-Miocene until the early Pleistocene (8.5 to 2.7 million years ago) and weighed as much as 17,000 kg.