Born This Day: Father of Paleobotany

Adolphe-Théodore Brongniart (Jan. 14, 1801 - Feb. 18, 1876) was a French botanist whose classification of fossil plants drew surprisingly accurate relations between extinct and existing forms prior to Charles Darwin's 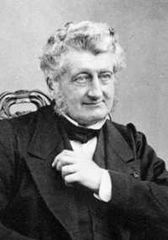 principles of organic evolution. His work earned him the distinction as the founder of modern paleobotany.

He was an early proponent of evolutionary theory. Brongniart published the first complete account of fossil plants (1828). His interpretations of the fossil record also contributed to our understanding of historical changes in climates and plant geography. link image
Posted by Michael J. Ryan, Ph.D. at 7:22 AM