A new discovery challenges one of the strongest arguments in favor of the idea that animals with bilateral symmetry existed before their obvious appearance in the fossil record during the early Cambrian, some 542 million years ago. Researchers report the first evidence that trace fossils interpreted by some as the tracks of ancient bilaterians could have instead been made by giant deep-sea protists, like those that can still be found at the seafloor to this day. 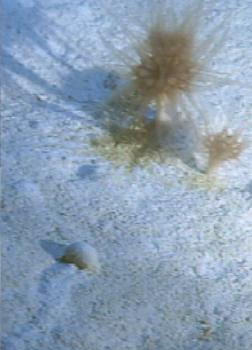 The giant deep sea protist, Gromia sphaerica, approaches three large cup corals growing on a half-buried sea urchin. Photo: Misha Matz
"Our paper gives the precedent of a protozoan that is motile, produces macroscopic traces, and has a large hydrostatically supported body," said Mikhail Matz. With these possibilities demonstrated, pretty much anything within the Precambrian fossil record can in principle be attributed to large protozoans, from the earliest traces and fossils of the Stirling formation that are 1.8 billion years old to the weird Ediacaran biota with which the Precambrian culminated."
Posted by Michael J. Ryan, Ph.D. at 2:33 PM