A Model For Flying Dinosaurs 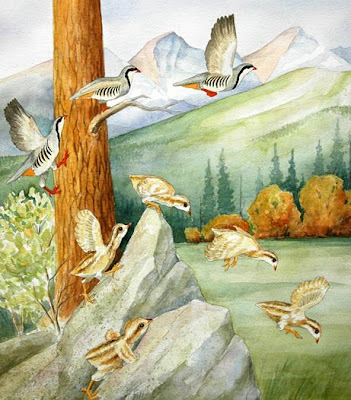 How a young bird learns to fly—as shown here in this illustration of Chukar partridges—is dependent on its learning a certain wing angle, a new study says. Illustration courtesy Robert Petty.

Abstract: The evolution of avian flight remains one of biology's major controversies, with a long history of functional interpretations of fossil forms given as evidence for either an arboreal or cursorial origin of flight. Despite repeated emphasis on the 'wing-stroke' as a necessary avenue of investigation for addressing the evolution of flight, no empirical data exist on wing-stroke dynamics in an experimental evolutionary context.

Here we present the first comparison of wing-stroke kinematics of the primary locomotor modes (descending flight and incline flap-running) that lead to level-flapping flight in juvenile ground birds throughout development (Fig. 1). 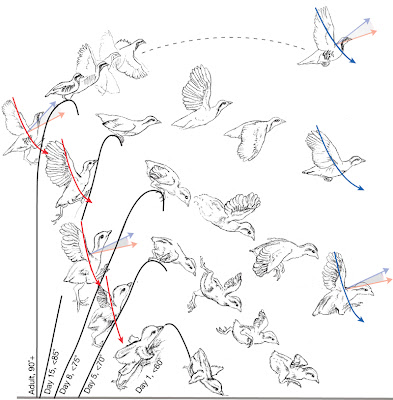 The fundamental wing-stroke described herein is used days after hatching and during all ages and over multiple behaviours (that is, flap-running, descending and level flight) and is the foundation of our new ontogenetic-transitional wing hypothesis. At hatching, chicks can ascend inclines as steep as 60° by crawling on all four limbs. From day 8 through adulthood, birds use a consistently orientated stroke-plane angle over all substrate inclines during wing-assisted incline running (red arcs) as well as during descending and level flight (blue arcs). Estimated force orientations from this conserved wing-stroke are limited to a narrow wedge (see Fig. 3b).
We offer results that are contrary both to popular perception and inferences from other studies. Starting shortly after hatching and continuing through adulthood, ground birds use a wing-stroke confined to a narrow range of less than 20°, when referenced to gravity, that directs aerodynamic forces about 40° above horizontal, permitting a 180° range in the direction of travel. Based on our results, we put forth an ontogenetic-transitional wing hypothesis that posits that the incremental adaptive stages leading to the evolution of avian flight correspond behaviourally and morphologically to transitional stages observed in ontogenetic forms.

CLICK TO ENLARGE
a, When wing-stroke plane angles are viewed side-by-side in both the vertebral and gravitational frames of reference, the wing-stroke is nearly invariant relative to gravity whereas the body axis re-orients among different modes of locomotion. Red lines represent the wing-tip trace in WAIR (flap-running) and blue lines represent the wing-tip trace in level flight. b, Wing-strokes are estimated to produce similar aerodynamic forces oriented about 40° above the horizon during WAIR, level flight and descending flight. Error bars are s.e.m. c, Representative traces of AOA through a wing-beat for an animal flap-running vertically (red) and in horizontal flight (blue) demonstrate the similarities of AOA among behaviours. The similarities are further clarified by examining wing cross-sections and mean global stroke-planes in the first, middle and last thirds of downstroke. Here, the orientation of the aerodynamic force (Faero) is estimated from the middle third.

The way in which vulnerable young birds use their wings while transitioning into adult bodies could be a model for how their ancestors developed the ability to fly, Dial said.

"When you step back and look at the fossils they are finding, the long-legged dinosaurs with half a wing, they look very uncannily like today's birds that are going through the juvenile stage," he said.