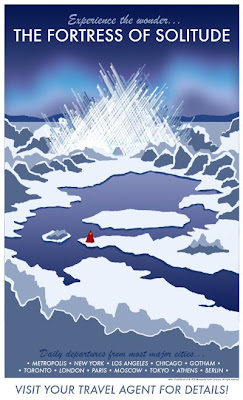 Poster by Chad Kerychuk and courtesy the Digital Dream Machine Blog. 'Superman' and 'The Fortress of Solitude' are ™ and © DC Comics.
Abstract:The 'snowball Earth' hypothesis posits the occurrence of a sequence of glaciations in the Earth's history sufficiently deep that photosynthetic activity was essentially arrested. Because the time interval during which these events are believed to have occurred immediately preceded the Cambrian explosion of life, the issue as to whether such snowball states actually developed has important implications for our understanding of evolutionary biology.

Here we couple an explicit model of the Neoproterozoic carbon cycle to a model of the physical climate system. We show that the drawdown of atmospheric oxygen into the ocean, as surface temperatures decline, operates so as to increase the rate of remineralization of a massive pool of dissolved organic carbon. This leads directly to an increase of atmospheric carbon dioxide, enhanced greenhouse warming of the surface of the Earth, and the prevention of a snowball state.
Posted by Michael J. Ryan, Ph.D. at 2:52 PM