Abstract: Hagfish, which lack both jaws and vertebrae, have long been the subject of intense interest owing to their position at a crucial point in the evolutionary transition to a truly vertebrate body plan. However, unlike the comparatively well characterized vertebrate agnathan lamprey, little is known about hagfish development. 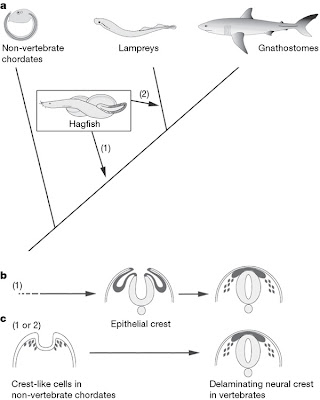 The hagfish may be either the sister group of all the other vertebrates (1), or that of lampreys (2). b, c, Hypotheses on neural crest evolution. b, The former hypothesis (1) would agree with the scenario that neural crest evolution had an intermediate epithelial state. c, Alternatively, the crest might have already been established as a population of delaminating cells in the common ancestor to all vertebrates, and this would be coherent with both hypotheses (1 or 2).

The inability to analyse hagfish at early embryonic stages has frustrated attempts to resolve questions with important phylogenetic implications, including fundamental ones relating to the emergence of the neural crest.

Here we report the obtainment of multiple pharyngula-stage embryos of the hagfish species Eptatretus burgeri and our preliminary analyses of their early development. We present histological evidence of putative neural crest cells, which appear as delaminated cells that migrate along pathways corresponding to neural crest cells in fish and amphibians. Molecular cloning studies further revealed the expression of several regulatory genes, including cognates of Pax6, Pax3/7, SoxEa and Sox9, suggesting that the hagfish neural crest is specified by molecular mechanisms that are general to vertebrates.

We propose that the neural crest emerged as a population of de-epithelialized migratory cells in a common vertebrate ancestor, and suggest that the possibility of classical and molecular embryology in hagfish opens up new approaches to clarifying the evolutionary history of vertebrates.
Posted by Michael J. Ryan, Ph.D. at 2:52 PM