Stegosaurus fossil has been discovered in Europe, marking the first time the famous plated dinosaur has been found outside of North America. 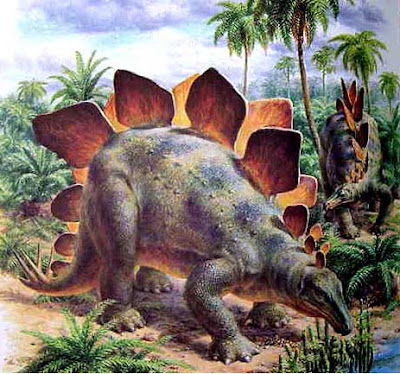 “Both coasts were very close and the basins between them could emerge occasionally,” said study leader Fernando Escaso of the Autonomous University of Madrid, Spain.

The scientists unearthed the new Stegosaurus fossils, which included a tooth and parts of the animal’s spinal column and leg bones, near the city of Batalha, in central Portugal. Preliminary analyses show the fossils to be indistinguishable from a species previously found only in North America, called Stegosaurus ungulatus.

The only other dinosaur for which bones have been found in both North America and Europe is a species of Allosaurus.

Abstract: More than one century after its original description by Marsh in 1877, we report in this paper the first uncontroversial evidence of a member of the genus Stegosaurus out of North America. The specimen consists of a partial skeleton from the Upper Jurassic of Portugal, herein considered as Stegosaurus cf. ungulatus. The presence of this plated dinosaur in the upper Kimmeridgian–lower Tithonian Portuguese record and synchronic levels of the Morrison Formation of North America reinforces previous hypothesis of a close relationship between these two areas during the Late Jurassic. This relationship is also supported by geotectonic evidences indicating high probability of an episodic corridor between the Newfoundland and Iberian landmasses. Together, Portuguese Stegosaurus discovery and geotectonic inferences could provide a scenario with episodical faunal contact among North Atlantic landmasses during the uppermost Kimmeridgian–lowermost Tithonian (ca. 148–153 Ma ago).
Posted by Michael J. Ryan, Ph.D. at 10:06 AM