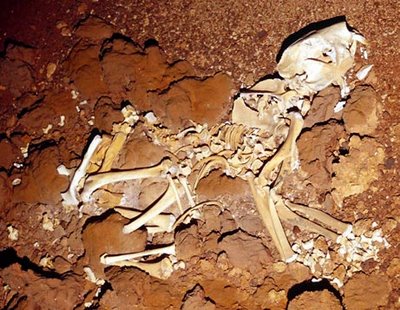 Analysis of fossil teeth from ancient mammals found in caves in Australia's Nullarbor Plain suggests that the region's large Ice Age animals were driven extinct by humans, not climate change.

First discovered in 2002, the three- to four-million-year-old Nullarbor Plain caverns have yielded fossils of 70 animal species dating from 800,000 to 400,000 years ago, including 10 intact skeletons of Thylacoleo, nearly hippo-size giant wombat, and 23 kangaroo species—8 of them new to science.

The rich diversity of species found in the ancient caves shows that life was similarly thriving in the region during the Ice Age. Two new species of tree kangaroos, for example, indicate that 300,000 years ago Nullarbor Plain wasn't as treeless as its name implies.

According to John Long, the findings "have virtually nailed that climate change wasn't a major factor" in the animals' extinction.

The scientists therefore believe that hunting pressures and wildfires linked to ancient humans may have finally tipped the balance against Australia's large animals.

But, also read this: Australian Megafauna Mass Death Due to Drought
Posted by Michael J. Ryan, Ph.D. at 8:34 AM