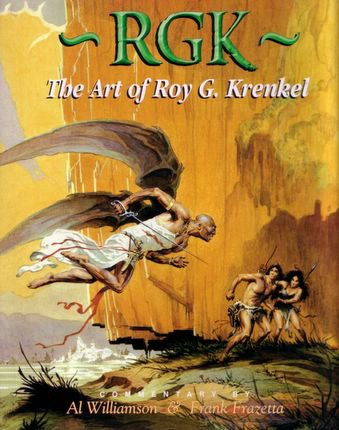 After a long absence the Paleo-Path is back again with a special installment on the late, great, and unsung artist, Roy Krenkel, to celebrate the new collection of his work, RGK - THE ART OF ROY G. KRENKEL, published by Vanguard Productions. The book is also an appreciation of the man and includes contributions by many of Roy's good friends such as Anglo Torres, Al Williamson, Frank Frazetta, William Stout, and many others.

Although not well known to the general public, Krenkel is revered amongst fantasy illustrators and students of fine pen & ink work. A number of high profile paleontologists are also fans of his work including researchers like Philip Currie who owns a significant number of Krenkel originals (including many unpublished pieces). 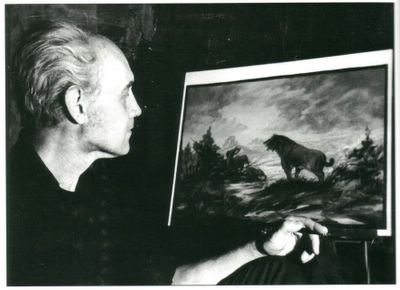 Although Krenkel did not exclusively draw prehistoric animals, he did produce dozens of finished pieces depicting antediluvian monsters, and hundreds, if not thousands, of sketches of his beloved sabre-toothed cats and cavemen. 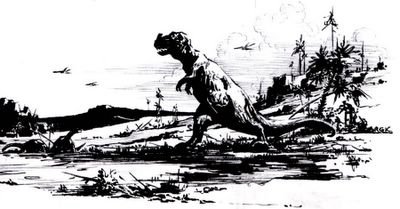 Much of Krenkel’s work stemmed from his love of the fiction of Edgar Rice Burroughs (ERB) and, indeed, he produced many illustrations and covers for the ACE reissues of Burroughs’ stories in the ‘60’s. Roy is also noted for, reputedly, showing Frank Frazetta how to paint when they collaborated on the covers for the first of the ACE Burroughs’ books.

This Paleo-Path installment features a reprinting of William Stout’s chapter from the new book examining Krenkel’s relationship with ERB. It is reprinted here with Bill’s permission and thanks to J. David Spurlock of Vanguard Productions who made this excellent book a reality.

You can order the book directly from Vanguard by clicking HERE.

From the time he began work in the literary field of adventure fantasy, the works of Tarzan creator Edgar Rice Burroughs have consistently served as a dynamic visual catalyst to artists imaginations the world over. 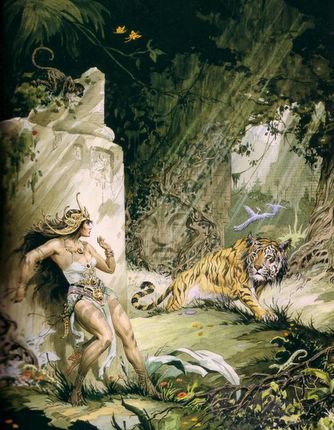 Cover to 'Land of the Hidden Men' by Edgar Rice Burroughs, Ace Books.

Bronx born artist Roy Gerald Krenkel was not immune to the seductive power of Burroughs word paintings. Roy was first exposed to the colorful works of ERB when he was nine or ten years old with a copy of Tarzan and the Golden Lion. This book was also Roy’s first glimpse of J. Allen St. John’s illustrations. According to Roy it was St. John’s art that inspired Krenkel to pursue more of Burroughs writing.

As an adult, before he was ever paid to do so, Krenkel was actively producing sketches and illustrations of Burroughs characters set in their exotic native lands of Africa, Mars, Venus and that prehistoric-peopled land at the center of our earth, Pellucidar. 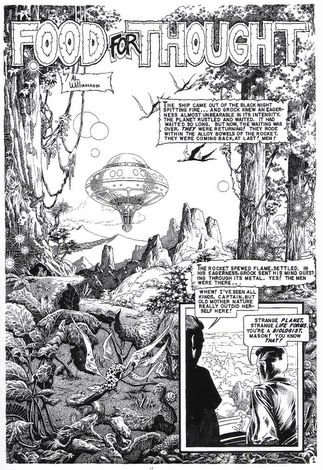 One of the Roy Krenkel’s most famous pieces, the masterful splash page to ‘Food For Thought” from the EC comic book, Incredible Science Fiction # 32 (1955). Although Roy’s good friend Al Williamson illustrated the story, Roy did the first page with the exception of the inset panel & the ‘flying snake’ in the foreground.

In the early 1960s Ace Books editor Donald Wolheim first took notice of Roy G. Krenkel's Edgar Rice Burroughs pen illustrations by way of the fantasy fan publication (or fanzine as they were known back then) Amra. Amra was devoted primarily (though not solely) to the works of Edgar Rice Burroughs and Conan creator Robert E. Howard (Amra the Loin was one of Conan’s given names). 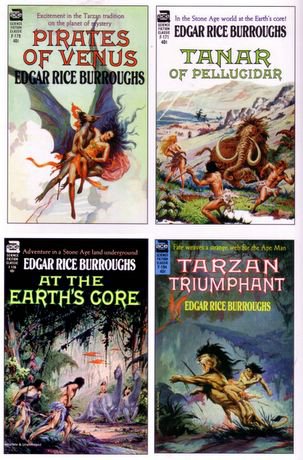 In 1962 Ace began to republish paperback books of some of the works by Edgar Rice Burroughs that Ace (mistakenly) thought had been allowed by Edgar Rice Burroughs, Inc. to lapse into public domain. At 44, Roy’s first job for Wolheim was not illustrating Burroughs, however. Instead he was asked to illustrate a Burroughs-contemporary imitator, Otis Adelbert Kline. Wolheim knew that Roy could easily pull off the title page pen illustrations he was planning to include inside the Burroughs novels; but Wolheim had doubts as to whether or not Krenkel could handle paint and color.

The Kline book was Planet of Peril and Roy did just fine.

After a few more Kline paperbacks Krenkel got his first Edgar Rice Burroughs assignments. Roy’s mainstream Burroughs debuts were huge artistic successes. One of his first was The Moon Maid (below). Stunning design and rich yet subtle color make The Moon Maid cover one of the best ERB paintings Roy ever executed. The ever-self-deprecating Krenkel confessed that he felt he had peaked with this early painting and that his Ace Burroughs covers were all downhill from there. 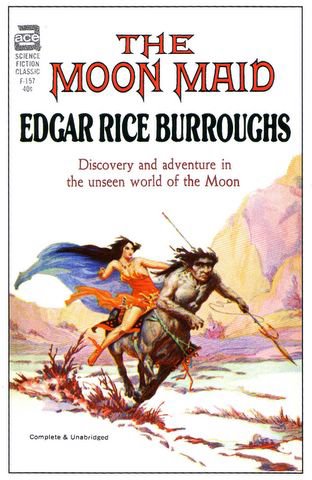 In addition to its painted cover each Ace Books Edgar Rice Burroughs volume held an inside treat for its purchaser: a line illustration by its cover artist on the title page. These title page illustrations allowed Roy to further explore other ERB story aspects using a medium of which he was in full command.

Despite the joy of being paid to paint and draw a subject matter dear to his heart, Krenkel was extremely sensitive to pressure.

He felt that pressure strongly with a stack of Wolheim Burroughs assignments sitting at his drawing board waiting for completion. Roy began to bring in his good friend Frank Frazetta to occasionally help him out. Frank would finish whatever Roy perceived as difficult to execute, attempting to paint his embellishments in Krenkel’s style. Eventually, to lighten his load, Krenkel convinced a reluctant(!) Wolheim to give Frazetta a shot at illustrating some of the Ace Books ERB titles. That generous opportunity made possible by Roy would ultimately change the life of Frank Frazetta (and the art world) forever.

There was pressure from Donald Wolheim on Krenkel and Frazetta to paint and draw in a style reminiscent of the most popular Burroughs illustrator of the early 1900s: J. Allen St. John. They both struggled with that pressure and resented it. There own strong individualities could not be smothered, however, and both artists emerged as their own men. 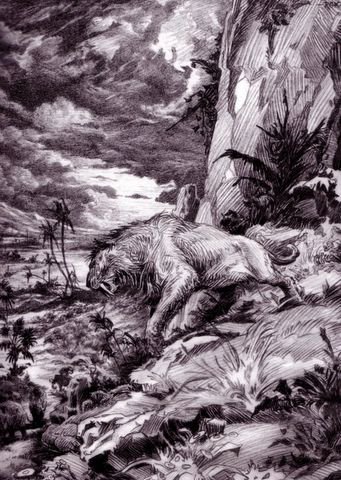 Wow, could Roy draw! One of the palaeoblogger’s all-time favourite Roy Krenkel drawings.

Adding to the magnificent work these two artistic friends were producing was the outstanding art direction of these little volumes. The type faces chosen for the Ace’s Burroughs series could not have been more sympathetic to the art and subject matter. With their Krenkel and Frazetta covers, the Crackerjacks-like surprise of the title page illustration in each book and the series’ outstanding art direction, the Ace Books Burroughs titles were not only an ERB fan's dream come true, they also functioned quite successfully as recruitment tools for thousands of new Burroughs readers. 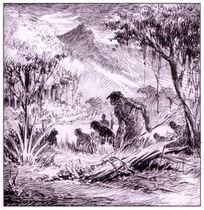 Around the same time as the Ace assignments Krenkel began to do other Burroughs work for Canaveral Press, another publishing company taking advantage of what they mistakenly perceived as the ERB copyright lapse. Canaveral Press published dustjacketed hardcover volumes.

Unfortunately, unlike Ace Books, the art direction at Canaveral was abominable; the type faces chosen for the covers were to a title absolutely atrocious. The one exception to this was Tales of Three Planets --- because Krenkel himself was allowed to execute the lettering and incorporate it into his cover illustration.

Despite the aesthetic deficits of the Canaveral volumes they had three important things going for them: 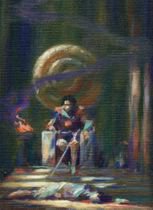 they were hardcover editions, they were substantially larger than paperbacks and they were printed on better paper. The larger size and better paper gave Roy Krenkel a chance to draw pen illustrations with the Franklin Booth-influenced linework and detail he knew would be successfully reproduced. His pen work in these volumes was much more elaborate than the smaller pen studies that were somewhat crudely reproduced on the cheap pulp interior paper of the Ace volumes. The Canaveral Burroughs titles really gave Roy a chance to show off his consummate skills as a penman.

Krenkel’s strengths as an artist are many. Roy was an eternal student with a voracious aesthetic appetite for artists and illustrators that were primarily from (but not limited to) the late 19th and early 20th century. Krenkel was well aware of St. John's work but he was also aware of the much greater world of fine art as well. He incorporated this vast knowledge into the making of each picture. 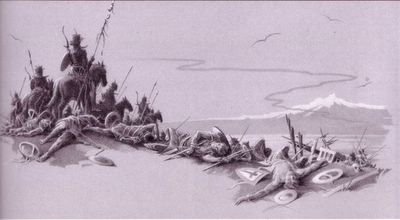 Roy had an outstanding sense of design (the conscious arrangement of shapes and dark and light systems or values); because of this he could instantly spot fake Tiepolos in New York museums at fifty yards. It's easy; Tiepolo never did a bad design in his life, he once told me. All of the Ace title page illustrations and several of the Tarzan and the Tarzan Twins illustrations are pen vignettes exhibiting an elegance of design that ranks with Howard Pyle's best masterful efforts.

Roy’s color sense varied. It was usually strong (most of the Ace Burroughs covers), sometimes powerful (The Mastermind of Mars and Tarzan Triumphant),

but once in a great while an experiment would go awry (the one cover I consider to be Roy’s clinker, the Ace edition of The Cave Girl which seems driven to include every color on Roy’s palette) or end up on the harsh end of the spectrum (Escape On Venus and The Chessmen of Mars). Often Krenkel would work with a safe monochromatic scheme that allowed his excellent drawing and design to sell his picture to the reader.

Roy’s figure drawing was appealingly codified and very romantic with a fine fundamental understanding of male and female anatomy. 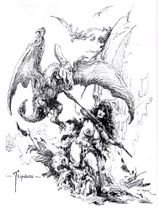 His settings were abundantly lush, dripping with luxuriant vegetation. His architecture (drawing inspiration from the historical reconstructions of William Walcot) stands ruined and exotically appropriate for the worlds of Edgar Rice Burroughs. Krenkel’s other worldly machinery is a marvelous mixture of Art Nouveau and Art Deco stylings. His creatures appear to be an alien combination of classic J. Allen St. John and the world’s premiere paleoartist, Charles R. Knight. 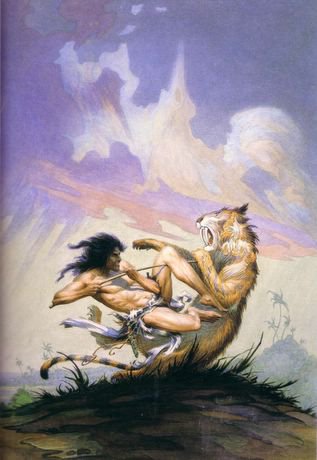 Roy Krenkel was well known for the self-deprecation of his work; he saw his own work as crude. The most self-complimentary he ever got was when he said, "I had fun with it" or "Sometimes, out comes a nice little picture". Krenkel bowed to J. Allen St. John as "the great Burroughs illustrator". For Roy’s generation this is undoubtedly true; but for the baby boomer Edgar Rice Burroughs fans of the 1960s (myself included) it was the awe-inspiring sense of wonder conveyed by the paintings and drawings of Roy G. Krenkel that began to redefine the rich visual legacy seeded by the worlds of Edgar Rice Burroughs, elevating that entire legacy in the process. 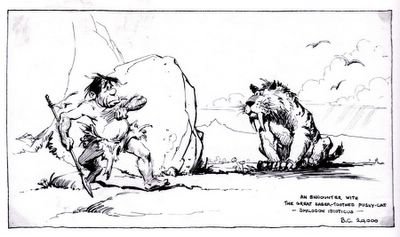 All art & characters are © the respective copyright holders.

All the art featured here is by Roy Krenkel & is from the book, RGK: The Art of Roy G. Krenkel which is available in:

Limited Deluxe Slipcassed hardcover with bonus material ($49.95); regular hardcover ($34.95); softcover ($24.95) and, Vanguard has produced 120 genuine leather-bound, gold guilded, ULTRA Deluxe editions containing an original Krenkel sketch in each (these are HIGHLY RECOMMENDED by the palaeoblogger who wishes he could afford one). The ULTRA editions are available only from the publisher at $250.00 each plus $15 for insured shipping in USA. Check or Money Order to: Vanguard, 390 Campus Drive, Somerset, NJ 08873.

You can e-mail the publisher at: vanguarpub@att.net
Website: CreativeMix.com/Vanguard available HERE

(please note that the palaeoblogger is getting no reward for this -- he just wants to let as many acquire the book as possible!)