Chilesaurus, A Plant-Eating Theropod from Chile 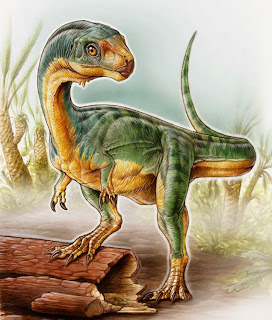 Chilesaurus had robust forelimbs similar to Jurassic theropods such as Allosaurus, although its hands were provided with two blunt fingers, unlike the sharp claws of fellow theropod Velociraptor. Chilesaurus' pelvic girdle resembles that of the ornithischian dinosaurs.

Chilesaurus can be considered a 'platypus' dinosaur because different parts of its body resemble those of other dinosaur groups due to mosaic convergent evolution. PR
Posted by Michael J. Ryan, Ph.D. at 1:39 PM