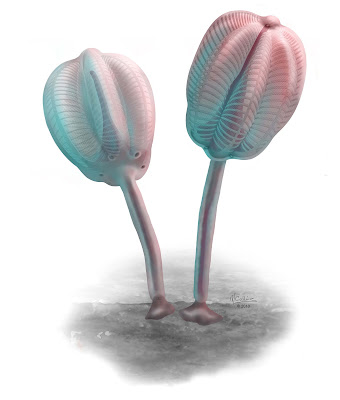 A bizarre creature that lived in the ocean more than 500 million years ago has emerged from the famous Middle Cambrian Burgess Shale in the Canadian Rockies.

Siphusauctum gregarium (~20 cm long) has a long stem, with a calyx – a bulbous cup-like structure – near the top which encloses an unusual filter feeding system and a gut. The animal is thought to have fed by filtering particles from water actively pumped into its calyx through small holes. The stem ends with a small disc which anchored the animal to the seafloor. Siphusauctum lived in large clusters, as indicated by slabs containing over 65 individual specimens. 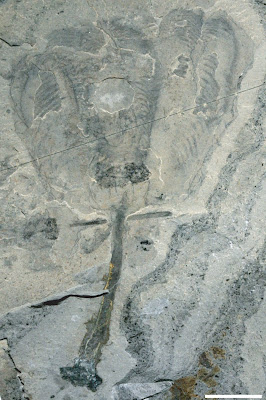 "Most interesting is that this feeding system appears to be unique among animals. Recent advances have linked many bizarre Burgess Shale animals as primitive members of many animal groups that are found today but Siphusauctum defies this trend. We do not know where it fits in relation to other organisms," said Lorna O'Brien. link
Posted by Michael J. Ryan, Ph.D. at 7:38 AM