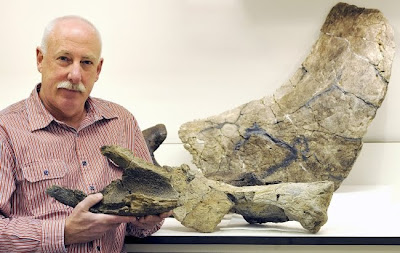 Ojoceratops fowleri, one of the largest known horned dinosaurs, was discovered in 2005 by Montana State University Ph.D. student Denver Fowler in the Four Corners area in the Bisti/De-Na-Zin Wilderness.

The discovery of the Ojoceratops bones, the events surrounding it and the details about the new ceratopsid dinosaur were released Thursday in a study published in the book New Perspectives On Horned Dinosaurs.

"Ojoceratops is a very distinctive beast," Robert M. Sullivan, senior curator of paleontology and geology at the State Museum of Pennsylvania, said in a news released issued by the New Mexico Museum of Natural History & Science. Sullivan led the series of expeditions to recover the bones.

Sullivan described the dinosaur in the Patriot-News on Tuesday as a three-horned vegetarian bigger than a hippopotamus and smaller than an elephant, about 17 to 20 feet in length.

"Based on other bones, such as the lower jaw and predentary, found in the same rock formation, Ojoceratops rivaled the size of Torosaurus and some of the larger specimens of Triceratops," Lucas said. From: The Santa Fe New Mexican
Posted by Michael J. Ryan, Ph.D. at 11:37 AM