Nectocaris, A Primative Cephalopod from the Burges Shale 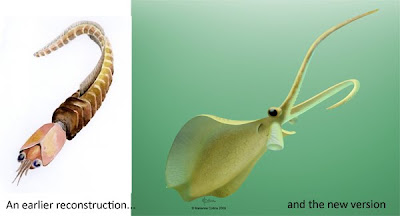 Abstract [edit]: We reinterpret the problematic Middle Cambrian animal Nectocaris pteryx as a primitive, non-mineralized cephalopod, based on new material from the Burgess Shale. Together with Nectocaris, the problematic Lower Cambrian taxa Petalilium and (probably) Vetustovermis form a distinctive clade, Nectocarididae, characterized by an open axial cavity with paired gills, wide lateral fins, a single pair of long, prehensile tentacles, a pair of non-faceted eyes on short stalks, and a large, flexible anterior funnel.

This clade extends the cephalopods’ fossil record by over 30 million years, and indicates that primitive cephalopods lacked a mineralized shell, were hyperbenthic, and were presumably carnivorous. The presence of a funnel suggests that jet propulsion evolved in cephalopods before the acquisition of a shell. The explosive diversification of mineralized cephalopods in the Ordovician may have an understated Cambrian ‘fuse’

Arrows indicate the crown groups of 1, molluscs; 2, conchifera; 3, cephalopods. Stars represent the earliest record of mineralization in each lineage.
Posted by Michael J. Ryan, Ph.D. at 7:54 AM