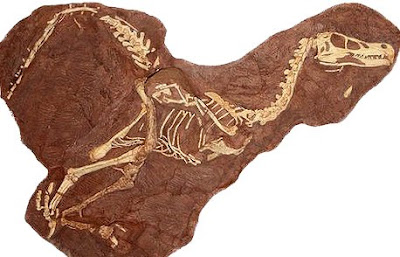 Linheraptor exquisitus was approximately eight feet long and 50 pounds, and would have been a fast, agile predator that preyed on protoceratopsians. Within the Dromaeosauridae family, Linheraptor is most closely related to another recently discovered species Tsaagan mangas. Tsaagan's skull indicates that it is more primitive than Velociraptor, and the skeleton of the new species should help reconstruct the series of evolutionary changes within the Dromaeosauridae.

Linheraptor was found by the researchers in approximately 75 million year-old red sandstone rocks during a 2008 field expedition in Inner Mongolia, China. It is the fifth dromaeosaurid discovered in these rocks, which are famous for their preservation of uncrushed, complete skeletons. These red sandstones are best known from the Flaming Cliffs field site in outer Mongolia, the location where Velociraptor was discovered and dinosaur eggs and nests were first found. link
Posted by Michael J. Ryan, Ph.D. at 12:30 PM