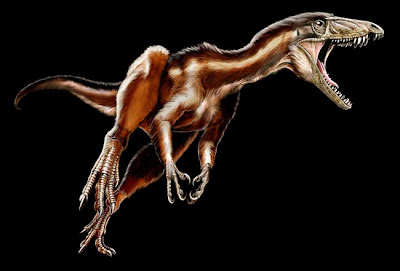 Image: Jorge Gonzalez
A new theropod genus Tawa hallae, from New Mexico (~ 214 million years ago) stood about 70 cm tall at the hips as a juvenile, and was about 2 m long from snout to tail. It is named after the Hopi word for the Puebloan sun god.

One of Tawa’s most important contributions to science has to do with what it says about Herrerasaurus, an unusual theropod placed either just outside or just inside the evolutionary tree of theropods.

The firm placement of Herrerasaurus within the theropod lineage suggests that once dinosaurs appeared, they very rapidly diversified into the three main dinosaur lineages that persisted for more than 170 million years.

Tawa skeletons were found beside two other theropod dinosaurs from around the same period. Lead author Sterling Nesbitt noted that each of the three is more closely related to a known dinosaur from South America than they are to each other. This suggests these three species each descended from a separate lineage in South America, and then later dispersed to North America and other parts of the supercontinent Pangaea. It also suggests there were multiple dispersals out of South America.