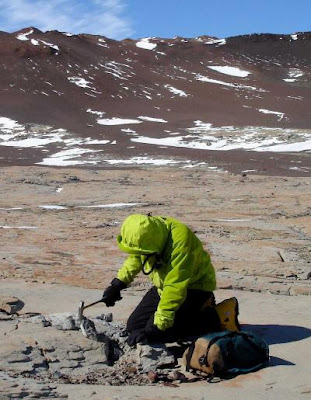 For the first time paleontologists have found fossilized burrows of tetrapods in Antarctica dating from the Early Triassic epoch, about 245 million years ago.

The fossils were created when fine sand from an overflowing river poured into the animals' burrows and hardened into casts of the open spaces. The largest preserved piece is about 35 cm long, 15 cm wide and 7 cm deep. No animal remains were found inside the burrow casts, but the hardened sediment in each burrow preserved a track made as the animals entered and exited. In addition, scratch marks from the animals' initial excavation were apparent in some places.

"We've got good evidence that these burrows were made by land-dwelling animals rather than crayfish," said Sidor. Despite the absence of fossil bones, the burrows' relatively small size suggests that their owners might have been small lizard-like procolophonids or an early mammal relative called Thrinaxodon.

Burrows, some containing tetrapod bones, have previously been excavated in South Africa, which is considered to be perhaps the world's richest fossil depository, and those burrows are nearly identical to the fossils unearthed in Antarctica. During the Triassic period, Antarctica and South Africa were connected as part of a supercontinent called Pangea.

To be published in the June edition of the Journal of Vertebrate Paleontology.
Posted by Michael J. Ryan, Ph.D. at 12:15 PM