The description of an ancient amphibian that millions of years ago swam in quiet pools and caught mayflies on the surrounding land in Texas has set to rest one of the greatest current controversies in vertebrate evolution. 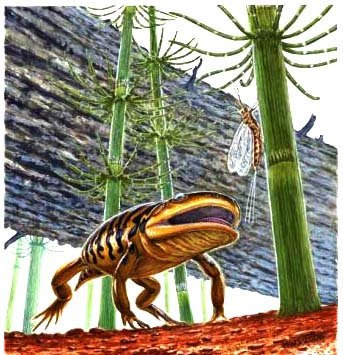 An Early Permian landscape, with Gerobatrachus hottoni lunging at the mayfly Protoreisma between stands of Calamites and under a fallen Walchia conifer. Art by Michael Skrepnick
From the press release:

“The dispute arose because of a lack of transitional forms. This fossil seals the gap,” says Jason Anderson, assistant professor, University of Calgary Faculty of Veterinary Medicine and lead scientist in the study.

The Gerobatrachus fossil provides a much fuller understanding of the origin and evolution of modern amphibians. The skull, backbone and teeth of Gerobatrachus have a mixture of frog and salamander features—the fossil has two fused bones in the ankle, which is normally only seen in salamanders, and a very large tympanic ear (ear drum). It also has a lightly built and wide skull similar to that of a frog. Its backbone is exactly intermediate in number between the modern frogs and salamanders and more primitive amphibians.

The new fossil also addresses a controversy over molecular clock estimates, or the general time salamanders and frogs evolved into two distinct groups.

“With this new data our best estimate indicates that frogs and salamanders separated from each other sometime between 240 and 275 million years ago, much more recently than previous molecular data had suggested,” says Robert Reisz.

Gerobatrachus was originally discovered in Texas in 1995 by a field party from the Smithsonian Institution that included the late Nicholas Hotton, for whom the fossil is named. It remained unstudied until it was “rediscovered” by Anderson’s team. It took countless hours of work on the small, extremely delicate fossil to remove the overlying layers of rock and uncover the bones to reveal the anatomy of the spectacular looking skeleton.

“It is bittersweet to learn about frog origins in this Year of the Frog, dedicated to informing the public about the current global amphibian decline,” continues Anderson. “Hopefully we won’t ever learn about their extinction.”
Posted by Michael J. Ryan, Ph.D. at 2:46 PM