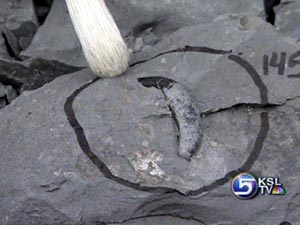 From KSL TV5 comes THIS STORY:

Scientists near Lake Powell discovered the fossilized remains of a creature so terrifying that if they'd found it 93 million years ago, it probably would have had them for lunch. And, they're excited because it's a brand new species. Scientists have been exploring the desert near Lake Powell for the last six years. Now they have a fearsome creature to show for it, buried in a bed of shale. They've excavated bones, that when fitted together in a museum will be a nearly complete skeleton of a plesiosaur.

It was a sea-going distant cousin of a dinosaur sporting 100 very nasty teeth. In its day, 93 million years ago, it might have been the toughest thing in the ocean.

David Gillette, Northern Arizona University: "A nasty bugger, yeah. It was an ambush predator. Probably loafed in the water just under the surface or even at depth, waiting for its prey to come by, and then would make a burst as an ambush and take it's prey without their even knowing it was there."

NB: North Dakota has been a literal washout due to rain. The Palaeoblogger has been holed up for the last few days looking over the fossil collection of ND Geological Survey, hence these occassional posts. I'm off to Alberta in a few hours.
Posted by Michael J. Ryan, Ph.D. at 12:48 PM