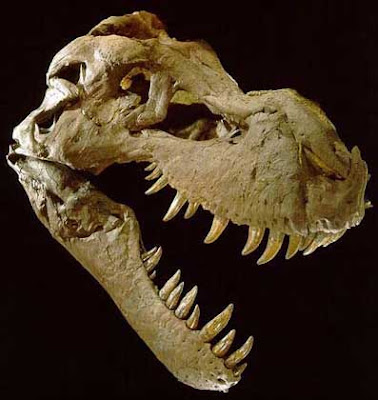 A new study pins the demise of ‘Sue’ and other tyrannosaurs with similar scars on an avian parasitic infection called trichomonosis, caused by a single-celled parasite that causes similar pathologies on the mandibles of modern birds, raptors in particular.

The focus of the new study was a survey of lesions on the jaws of Sue and nine other tyrannosaur specimens. The lesions had previously been attributed to bite wounds or, possibly, a bacterial infection.

It is possible the infection in her throat and mouth may have been so acute that the 42-foot-long, 7-ton dinosaur starved to death, says Wolff.

The scars of combat among tyrannosaurs and other dinosaurs, Wolff notes, are not uncommon, but differ notably from the lesions that are the focus of the current study. The holes caused by trichomonosis tend to be neat and have relatively smooth edges, while bite marks are often messy, and they scar and puncture bone in ways that are not readily comparable.

"The lesions we observe on Sue suggest a very advanced stage of the disease and may even have been the cause of her demise," says Wolff. "It is a distinct possibility as it would have made feeding incredibly difficult. You have to have a viable pharynx. Without that, you won't make it for very long, no matter how powerful you are." link
Posted by Michael J. Ryan, Ph.D. at 1:48 PM