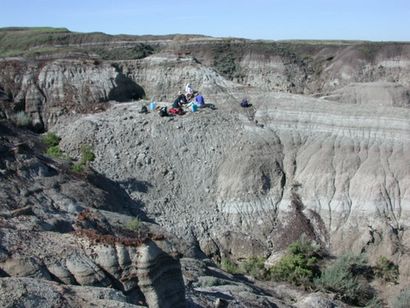 RTMP technician, Mark Mitchell, U of Calgary undergraduate, Reilly, Eric Snively, and long time volunteer, Dr. Brad Belluk work on collecting the postcrania of a ceratopsid from the top of the Dinosaur Park Formation in the SE corner of DPP, near Iddesleigh. The quarry was first opened in 2000 and has produced the skull and most of the body of a potentially new ceratopsid. I spent my final week in Alberta working on the paper describing this new skeleton. Unfortunately, one of the few elements missing from the animal is the frill (parietal) -- one of the most important bones for identifying any ceratopsid. In 2006, Dr. Don Brinkman from the RTMP, Brad and his wife Carolyn, and myself plan to take down the rest of the hill and find this elusive element.

The quarry got its nickname for the vortex-like winds that tend to swirl around it and have the tendency to blow away any quarry maps not secured to the ground. 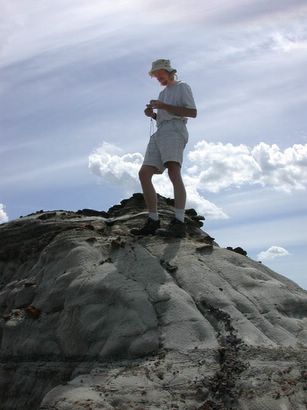 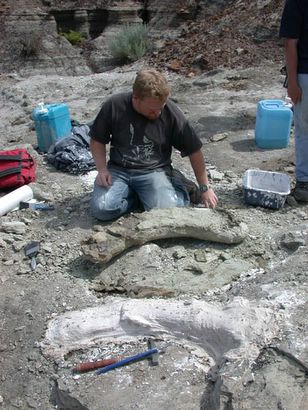 Mark Mitchell collects one of the two ischia we found this summer.
Posted by Michael J. Ryan, Ph.D. at 11:00 AM