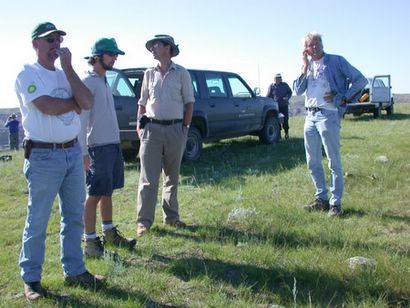 In Dinosaur Provincial Park Dr. David Eberth, David Evans, Darren Tanke, and Dr. Philip Currie inadvertently strike a pose straight off of a 1980's album cover. We were there on the north side of the Red Deer River so that David, Phil, and I could compare notes on a possible Styracosaurus bonebed (BB 167) that Dr. Eva Kopplehus had found a few years earlier. The concensus was that it was not. But we found some more UADs (uncollected articulated dinosaurs)-- there are now several hundred of these in Dinosaur Park (you can pick up your jaws now!).
Posted by Michael J. Ryan, Ph.D. at 5:49 AM