From the presse release at EurekAlerts:

An ancient shellfish not seen for 425 million years is recreated in vivid 3D images published today, following a unique fossil find in the UK. 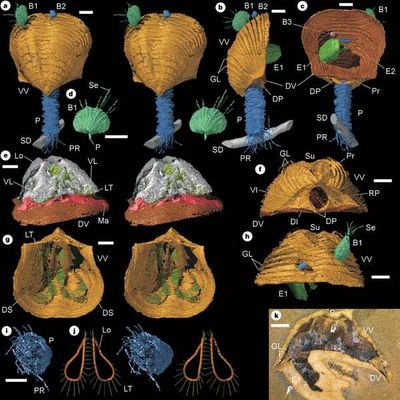 The 'articulate brachiopod' fossil, found in a quarry in Herefordshire, England, is the first of its kind to be preserved with its soft parts intact in 3D. It was discovered by Dr Mark Sutton of Imperial College London, who reveals the structure of the clam-like organism using a 3D colour computer model in this week's Nature. Showing the internal structure of the brachiopod as well as the stalk and rootlets that kept it tethered in place, the model gives a unique insight into the workings of the ancient shellfish.

Dr Mark Sutton, a lecturer in the Department of Earth Science and Engineering, who discovered the fossil alongside colleagues at the Universities of Yale, Oxford and Leicester, said: "This is a significant discovery because it is something we never dared to dream we might see - an ancient fossil articulate brachiopod with its fleshy parts intact, and preserved in three-dimensions to boot.

The find has challenged the assumption that ancient brachiopods were put together in the same way as their modern descendents. The ancient model is unusual because its rootlets are physically tied onto a stick-like object on the sea-floor, most likely to be debris from a dead sea-lily. Some modern brachiopods have rootlets, but they spread out into soft sediment, just as plant roots do.

NB: Dr Mark Sutton will be speaking about this fossil and other exciting finds during his talk 'The Herefordshire Lagerstatte: a 3D glimpse of Silurian life' at the BA Festival of Science, Dublin, on Thursday 8 September 2005 from 15.40 to 16.00.
Posted by Michael J. Ryan, Ph.D. at 2:35 PM