Scientists from the Western Australia Museum have begun an in-depth study of skeletal remains of extinct animals found in a cave on the Nullarbor. The scientists were first alerted to the remains by a group who stumbled across them while exploring a remote cave system in 2002. 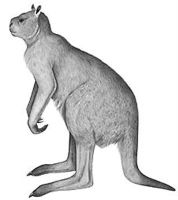 Since then about 60 examples of extinct animals have been recovered including well preserved fossils of marsupial lions, giant kangaroos and reptiles. Museum spokesman Dr Gavin Predeau says the aim of the research is to learn more about what types of animals and plants lived on the Nullarbor 500,000-years-ago. "A whole range of other extinct animals, as well including approximately 20 species of kangaroo, which is quite remarkable and about half of those are entirely new to science," he said.

"Some of them are pint-size sort of little bettong or wallaby-sized animals and they range right up to 250 kilogram giants." Dr Predeau says much of the research to date has focused on the marsupial lion but it has now shifted to the many other species found in the cave.

"That includes birds, and lizards, snakes and so it's really quite a diverse fauna," he said. "So basically getting an overall handle on the nature of the fauna as a whole, describing the new species, trying to work out what sort of environment was out on the Nullarbor half-a-million-years ago."
Posted by Michael J. Ryan, Ph.D. at 7:51 PM