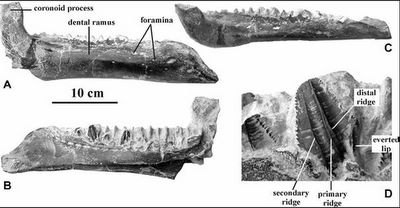 Abstract: The right dentary of a new hadrosauroid dinosaur, Penelopognathus weishampeli, has been discovered in the Bayan Gobi Formation (Albian, Lower Cretaceous) of Inner Mongolia (P.R. China). This new taxon is characterised by its elongated, straight dental ramus, whose lateral side is pierced by about 20 irregularly distributed foramina. Its dentary teeth appear more primitive than those of Probactrosaurus, but more advanced than those of Altirhinus, both also from the Lower Cretaceous of the Gobi area. Non-hadrosaurid Hadrosauroidea were already well diversified in eastern Asia by Early Cretaceous time, suggesting an Asian origin for the hadrosauroid clade. 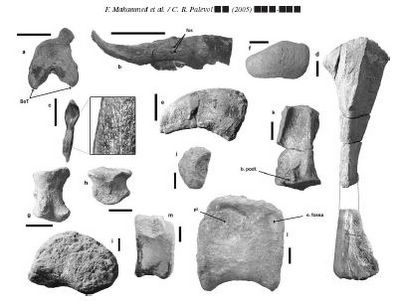 Abstract: Continental strata of Early and Middle Jurassic age are seldom-exposed, and little is known of the history of sauropod dinosaurs prior to the neosauropod radiation of the end of the Middle Jurassic. Here, we report, in the Middle Jurassic of the Occidental Saharan Atlas (Algerian High Atlas), the discovery of a skeleton, including cranial material, of a new cetiosaurid sauropod. Chebsaurus algeriensis n. g., n. sp. represents the most complete Algerian sauropod available to date, only few remains were found before.