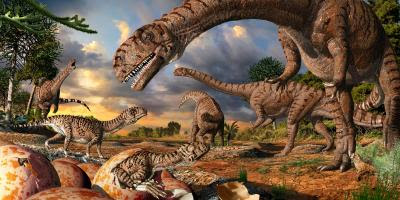 Abstract [edit]: The extensive Early Jurassic continental strata of southern Africa have yielded an exceptional record of dinosaurs that includes scores of partial to complete skeletons of the sauropodomorph Massospondylus, ranging from embryos to large adults.

In 1976 an incomplete egg clutch including in ovo embryos of this dinosaur, the oldest known example in the fossil record, was collected from a road-cut talus. Recent work started in 2006 has yielded multiple in situ egg clutches, documenting the oldest known dinosaurian nesting site, predating other similar sites by more than 100 million years.

The presence of numerous clutches of eggs, some of which contain embryonic remains, in at least four distinct horizons within a small area, provides the earliest known evidence of complex reproductive behavior including site fidelity and colonial nesting in a terrestrial vertebrate.

A temporally calibrated optimization of dinosaurian reproductive biology not only demonstrates the primary significance of the Massospondylus nesting site, but also provides additional insights into the initial stages of the evolutionary history of dinosaurs, including evidence that deposition of eggs in a tightly organized single layer in a nest evolved independently from brooding.
Posted by Michael J. Ryan, Ph.D. at 3:29 PM