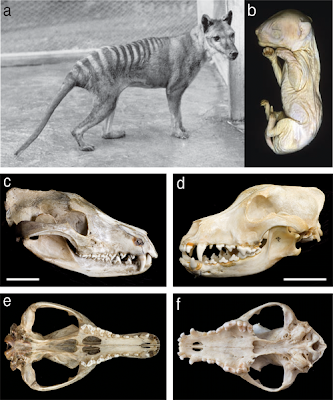 The thylacine, Thylacinus cynocephalus. (a) Young male thylacine in Hobart Zoo in 1928, photograph (Q4437). (b) One of the preserved pouch young specimens (head length 34 mm) from which DNA was extracted, from the Museum Victoria collection. (c-f) The skull of the thylacine (c,e) compared with that of the domestic dog Canis canis (d,f). Scale bar = 5cm.

Researchers have extracted genes from the extinct Tasmanian tiger (thylacine), inserted it into a mouse and observed a biological function – this is a world first for the use of the DNA of an extinct species to induce a functional response in another living organism.

The results showed that the thylacine Col2a1 gene has a similar function in developing cartilage and bone development as the Col2a1 gene does in the mouse.

“Up until now we have only been able to examine gene sequences from extinct animals. This research was developed to go one step further to examine extinct gene function in a whole organism,” he said. The last known Tasmanian tiger died in captivity in the Hobart Zoo in 1936. This enigmatic marsupial carnivore was hunted to extinction in the wild in the early 1900s.

Researchers say fortunately some thylacine pouch young and adult tissues were preserved in alcohol in several museum collections around the world. The research team isolated DNA from 100 year old ethanol fixed specimens. After authenticating this DNA as truly thylacine, it was inserted into mouse embryos and its function examined. The thylacine DNA was resurrected, showing a function in the developing mouse cartilage, which will later form the bone.
Posted by Michael J. Ryan, Ph.D. at 10:56 PM