Scientists report evidence of a large ornithopod dinosaur, as well as a herd of 11 small and large sauropods walking along a Mesozoic coastal mudflat in what is now the Republic of Yemen. 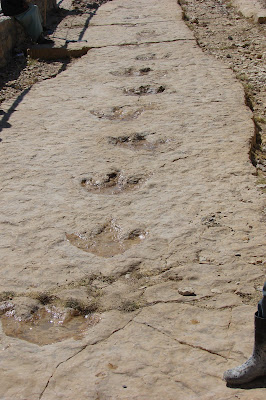 A Yemeni journalist spotted one of the trackways in 2003, about 50 kilometers north of the capital of Sana’a in the village of Madar. Only a few dinosaur fossils have been reported so far from the Arabian Peninsula, including isolated bones from the Sultanate of Oman, which Schulp has studied, and possible fragments of a long-necked dinosaur from Yemen.

In late 2006, the research team conducted further field work at the Madar site. By taking measurements on the shape and angle of the different digits, they were able to identify the bipedal dinosaur as an ornithopod. The size, shape and spacing of the quadrupedal prints were used to identify the body size, travel speed and other distinguishing features of the animals in the sauropod herd, Stevens said.

The rocks in which the dinosaur tracks are preserved are likely Late Jurassic in age, some 150 million years old, according to Al-Wosabi. The tracks probably went unnoticed for so long, Schulp explained, because they were too big to be spotted by the untrained eye and were partially covered by rubble and debris. “It isn’t a surprise that they were overlooked,” he said.

The Yemen Geological Survey has implemented protective measures to preserve the trackways and to improve their accessibility to tourists, the researchers report.
Posted by Michael J. Ryan, Ph.D. at 10:40 AM