A basal ichthyosauriform with a short snout from the Lower Triassic of China. 2014. Motani, R., et al. Nature 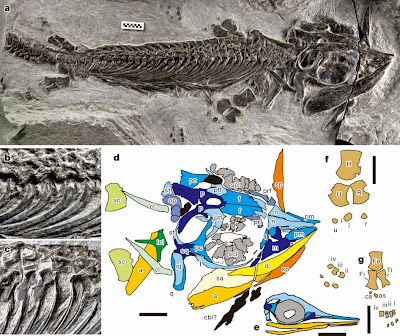 The first fossil of an amphibious ichthyosaur, Chaohusaurus, has been discovered in China. The fossil represents a missing stage in the evolution of ichthyosaurs, marine reptiles from the Age of Dinosaurs about 250 million years ago. Until now, there were no fossils marking their transition from land to sea.

Unlike ichthyosaurs fully adapted to life at sea, this one had unusually large, flexible flippers that likely allowed for seal-like movement on land. It had flexible wrists, which are essential for crawling on the ground. Most ichthyosaurs have long, beak-like snouts, but the amphibious fossil shows a nose as short as that of land reptiles. PR
Posted by Michael J. Ryan, Ph.D. at 8:22 AM