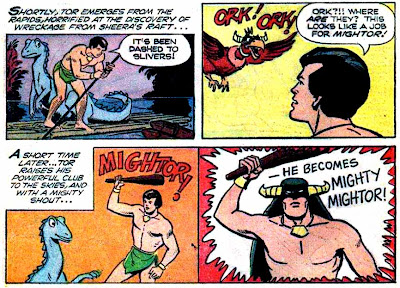 image
"While on a hunting trip, Tor and his faithful companion Tog rescue an ancient hermit from a Tyrannosarus rex. Grateful, the old man gives Tor a club which possesses great powers. Tor raises the club and he becomes Mightor, and Tog is transferred into a fire-breathing dragon. Together they become champions of good and the nemesis of evil!" From the opening narration. link.