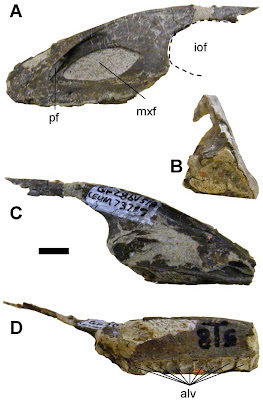 The holotype specimen CEUM 7319, a maxilla.

Troodontid dinosaurs like Geminiraptor are "raptor-like" dinosaurs that are often credited with being more intellectually advanced. In fact, in 1982 an imaginative intelligent troodontid "dinosauroid" was proposed by Dale Russell of the National Museum Canada, as the logical consequence if dinosaurs had not gone extinct. This fantastic reconstruction has been criticized as being too anthropomorphic, but was based on the fact that the troodontid braincase was as much as six times larger than other dinosaurs. 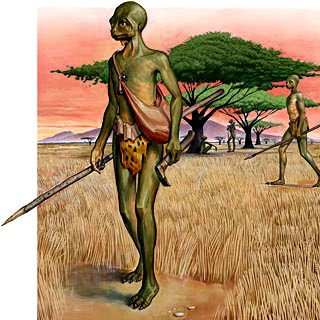 image
Most troodontid dinosaurs from North America are dated to 72-75 million years ago. Geminiraptor, at about 125 million years of age, is easily the oldest. The incomplete upper jaw inflated by a large and unique air sack readily identifies the fossil as belonging to a new species of troodontid.

CLICK TO ENLARGE
Comparison of the maxilla of Geminiraptor suarezarum to those of other paravians.

Geminiraptor, meaning "Twin Predatory Thief of the Suarezes" is named in honor of Marina and Selina Suarez, graduate students from Temple University in Philadelphia, PA.
Posted by Michael J. Ryan, Ph.D. at 10:36 PM