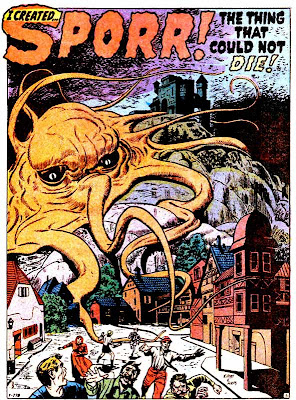 Sporr © Marvel Comics
Abstract: Colonization of the land by plants most likely occurred in a stepwise fashion starting in the Mid-Ordovician. The earliest flora of bryophyte-like plants appears to have been cosmopolitan and dominated the planet, relatively unchanged, for some 30 million years. It is represented by fossilized dispersed cryptospores and fragmentary plant remains.

In the Early Silurian, cryptospore abundance and diversity diminished abruptly as trilete spores appeared, became abundant, and underwent rapid diversification. This change coincides approximately with the appearance of vascular plant megafossils and probably represents the origin and adaptive radiation of vascular plants.

We have obtained a diverse trilete spore occurrence from the Late Ordovician that suggests that vascular plants originated and diversified earlier than previously hypothesized, in Gondwana, before migrating elsewhere and secondarily diversifying.
Posted by Michael J. Ryan, Ph.D. at 10:11 AM