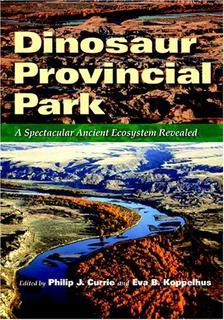 Dinosaur Provincial Park is a unique palaeontological and geological resource in Canada. Simply put, the Park is one of the richest Cretaceous-age vertebrate 'graveyards' in the world with a treasure of well-preserved dinosaurs that has made it uniquely famous in the eyes of both palaeontologists and the public.

The primary goal of the Dinosaur Park Symposium is to bring together 250 palaeontologists, geologists, and palaeontological enthusiasts who recognize the vital role that Dinosaur Provincial Park continues to play in our understanding of the dinosaurian world. Approximately 75 contributors will offer a variety of oral and poster presentations relating to the Park, as well as related rocks and fossils from around the world. There will be a published abstract volume.

Occurring during Alberta's Centennial Year, the Dinosaur Park Symposium coincides with the Tyrrell Museum 's 20th anniversary, and the 50th anniversary of Provincial Park designation. We anticipate that the Symposium will be one of Canada 's palaeontological highlights for 2005.

- Keynote talks by David Spalding and Scott Sampson that will provide historical context and global perspective for the Park's resources.

- Viewing of new specimens from the Park, including the Park's newest dinosaur (compliments of Michael Ryan).

- Post-symposium field trip to Dinosaur Provincial Park on Monday, September 26, 2005 (there is an additional fee for this field trip).
Posted by Michael J. Ryan, Ph.D. at 11:17 PM